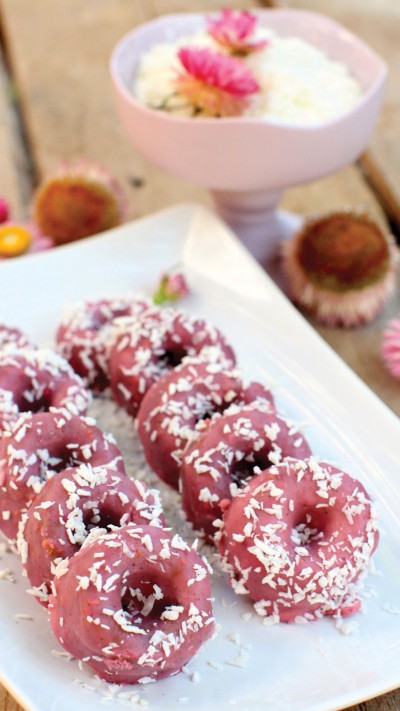 To make the doughnut base: Place the dates, almond flour, coconut flour, coconut flakes, coconut sugar, and vanilla bean powder in a food processor. Process until well combined. While the machine is running, pour the agave nectar in through the top, processing until the dough sticks together, approximately 15 seconds.

Divide the dough into 20 small pieces and firmly press the pieces into the doughnut pan. If you don’t have a doughnut pan, shape the doughnuts and place them on the parchment-lined tray. Set in the refrigerator while you make the glaze.

To make the pink glaze: Place the raspberries, vanilla bean powder, coconut butter, coconut milk, agave nectar, and lemon juice in a blender and blend until smooth. Pour into a medium bowl.

To assemble: Remove the doughnuts from the pan by tracing the outside of the doughnuts with an offset spatula, gently lifting around the edges until they pop out. Working one at a time, place each doughnut in the glaze bowl so one side gets coated with glaze, then lift it from the bowl with a fork. Tap the fork against the rim of the bowl to allow excess glaze to drip off and place the doughnut, glaze side up, on the parchment-lined tray. Repeat until all the doughnuts are coated.

Sprinkle coconut flakes onto the wet doughnuts and refrigerate for 30 minutes or until the glaze hardens. Serve immediately or store in the refrigerator for up to 3 days.