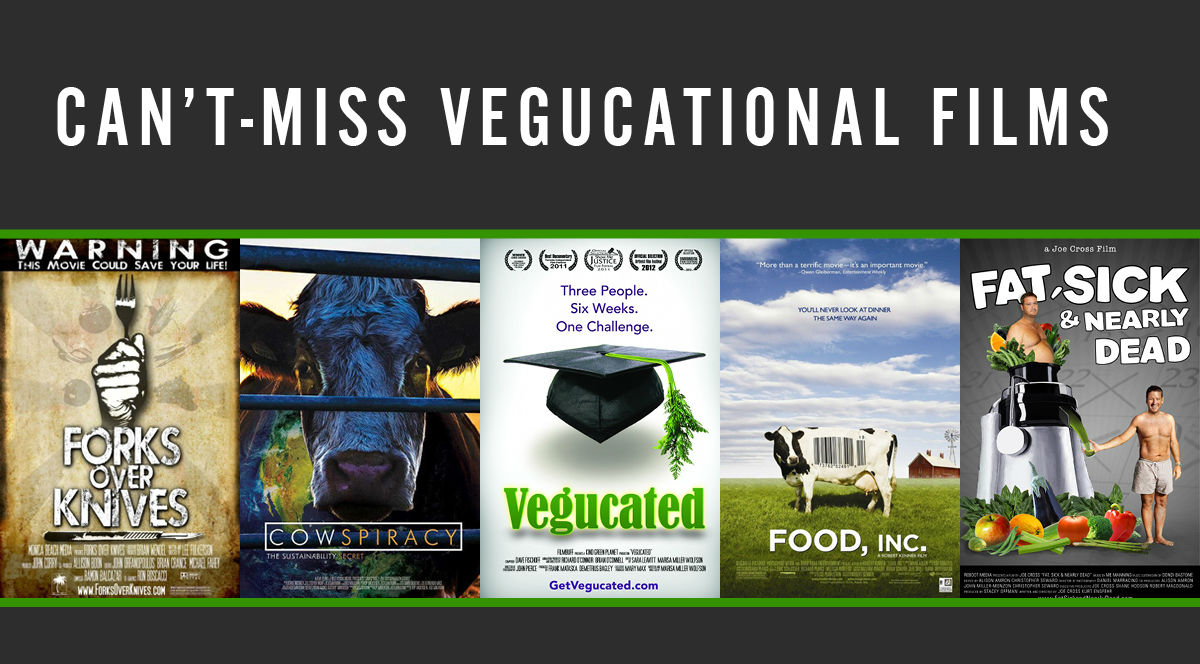 With Thanksgiving vacation coming up here in the States, it’s the perfect time to cuddle up with some butter-free popcorn and a movie . . . but what to watch? We’re big fans of these inspiring vegan-friendly documentaries that are currently streaming on Netflix.

If there are any others you’d add to the list, let us know in the comments!

As the title suggests, this film advocates a whole foods plant-based diet as a way to prevent and even reverse chronic health issues, including diabetes, coronary artery disease, and even cancer. Forks Over Knives examines the careers and findings of physician Caldwell Esselstyn and biochemist T. Colin Campbell, whose renowned book The China Study provides a basis for the documentary.

This environmental doc, a recent Netflix addition, explores the devastating impact animal agriculture has on our planet, including everything from the disappearing rainforests to ocean dead zones. The film (produced by Leonardo DiCaprio) includes investigations into why major environmental organizations such as the Sierra Club and Greenpeace are not doing more to make the factory farming industry’s detrimental nature known to the public.

Touted as “part sociological experiment and part adventure comedy,” this documentary follows three meat and cheese-lovers who agree to adopt a vegan diet for six weeks. Dr. Campbell again makes an appearance, along with other experts, to educate the participants about why adopting a plant-based diet is good for their health and the environment.

Narrated by journalists Michael Pollan and Eric Schlosser, this Academy Award nominated documentary encourages meat awareness along with the consumption of locally grown food. An in-depth investigation into corporate farming, Food, Inc. doesn’t go so far as to advocate the elimination of dairy from people’s diets, but it is nonetheless an enlightening look at agribusiness, revealing it to be inhumane, environmentally and economically unsustainable, and a producer of nutritionally-deficient foods.

Similar to Vegucated, this documentary follows filmmaker Joe Cross who, at 310 pounds and suffering from a debilitating autoimmune disease, is willing to radically transform his diet in hopes of improving his health. For sixty days, Cross swaps junk food for fresh fruit and vegetable juice and travels across the U.S., talking to hundreds of Americans about food and health. A sequel, Fat, Sick and Nearly Dead 2, came out in 2014 and is also streaming on Netflix.